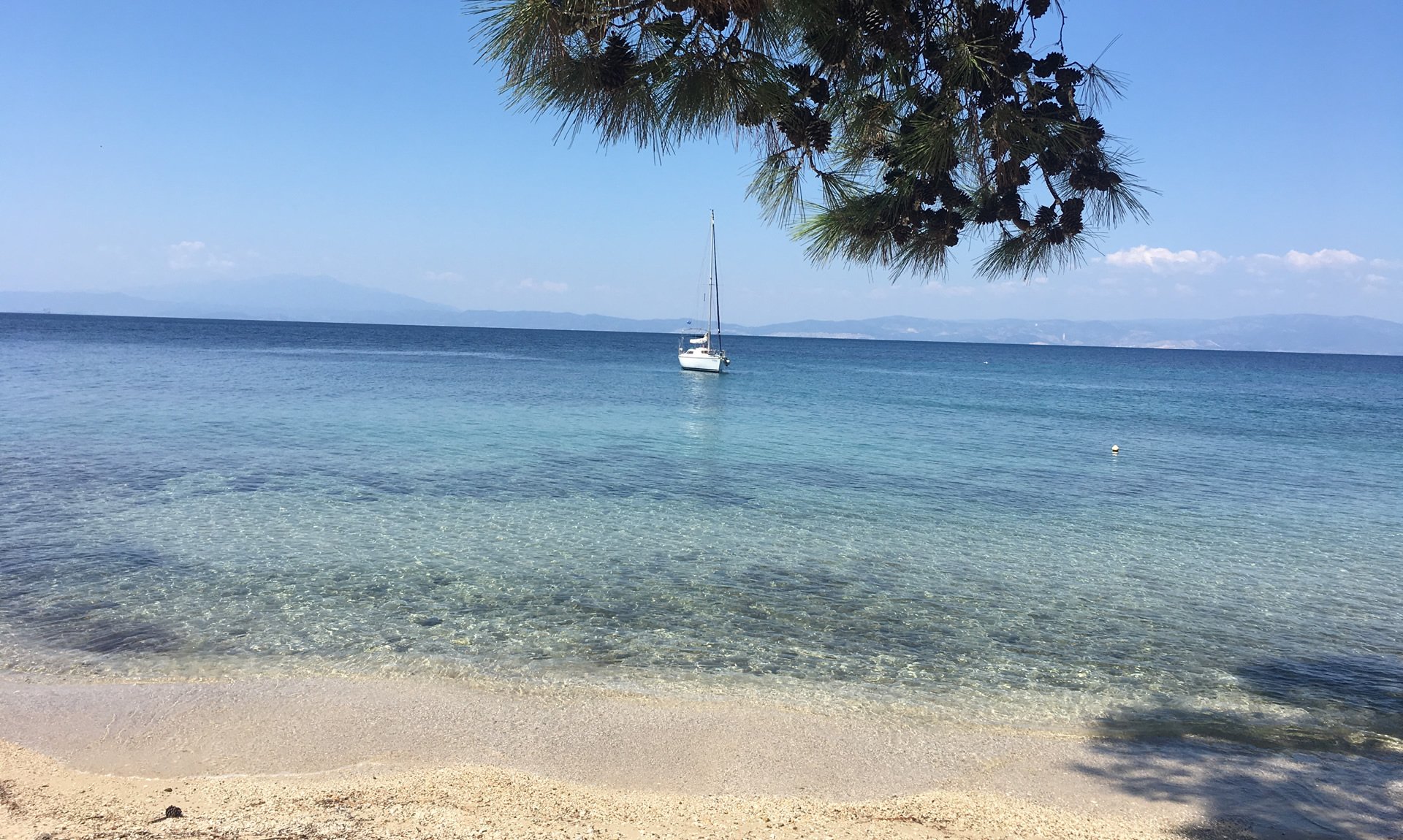 Thassos: The island of 100 beaches

A holiday in Thasos opens the traveler's desire to discover the many beaches on this island.

A summer tourist attraction for many Romanians at present, Thassos Island is a beach paradise. However, until this year I have never visited this island.

After a holiday spent last year in Thassos by our eldest daughter, Daria, at her warm recommendation, we decided to take her as a guide and try to reach this summer paradise.

The drive to Thassos is a pretty tedious one, and for most of us it starts with leaving the country at the Giurgiu customs.

The final point of exit from Bulgaria are generally the customs in Makaza, from where you descend rapidly through mainland Greece, to the town of Keramotis.

Attention, even if you come from another direction, choose Keramotis as your ferry crossing point because, generally, until 8:00 pm there are passenger rides to Thassos every half hour, and then every hour until 23:00.

The other point, represented by the city of Kavala, is not so rich in rides towards Thassos, and they are missing especially in the second part of the day.

Refuel your car in Bulgaria. You will save a lot, because the price per liter of fuel is lower there than in Romania. At the same time, in Greece the price is extremely high.
However, if you crossed the border, hurry to fuel as soon as possible. As you descend to the coast, the price increases gradually. When we traveled there, for instance, the price of one liter of petrol in the border region was about 1,589 Euro, while in Keramoti you could not find any price below 1.65 Euro, while on the island, it did not fall below 1.79 Euro/liter.

There are two companies that provide the crossings from Keramoti, which are distinguished both by the color of the ferries (red or blue) and by the booth where the tickets are purchased. We took the “red” ride at 6:30 pm, to Limenas, we left the car on the lower deck and quickly went on the upper deck to admire the view. 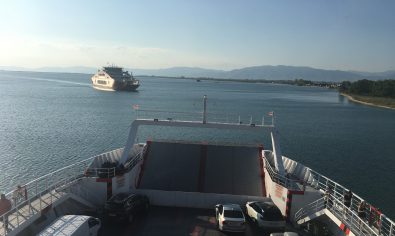 You can see the shore of Thassos Island in the distance 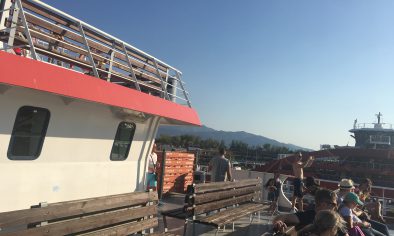 On the upper deck 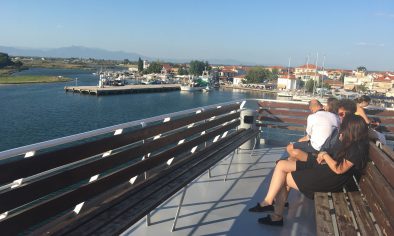 On the upper deck

The crossing does not take more than 35 minutes, so you are quickly disembarked on the island and from here the adventure begins.

What impresses you first of all on the island of Thassos is the excellent infrastructure. The highway that runs around the entire island, parallel to the shore, is excellent, having the standard width of European roads. Far from the narrow trails on the rocks that you might expect from the Greek islands.

Generally the speed is limited to 90Km/h, but thanks to the frequent curves, due to the mountainous relief, you need not hurry too much. Nor is it recommended, after all, here the atmosphere is a relaxed one, typical for vacation.

From place to place, from the main road, most often in the direction of the coast, roads branch off leading to the different villages and beaches that have made the island of Thassos famous.

We stayed, as most of those who visit Thassos do, in a rented apartment somewhere in the town of Skala Rachoniou (marked with the red symbol on the map).

Here is the list of beaches we visited during this stay, together with their location on the map that we suggest you visit with us further on. 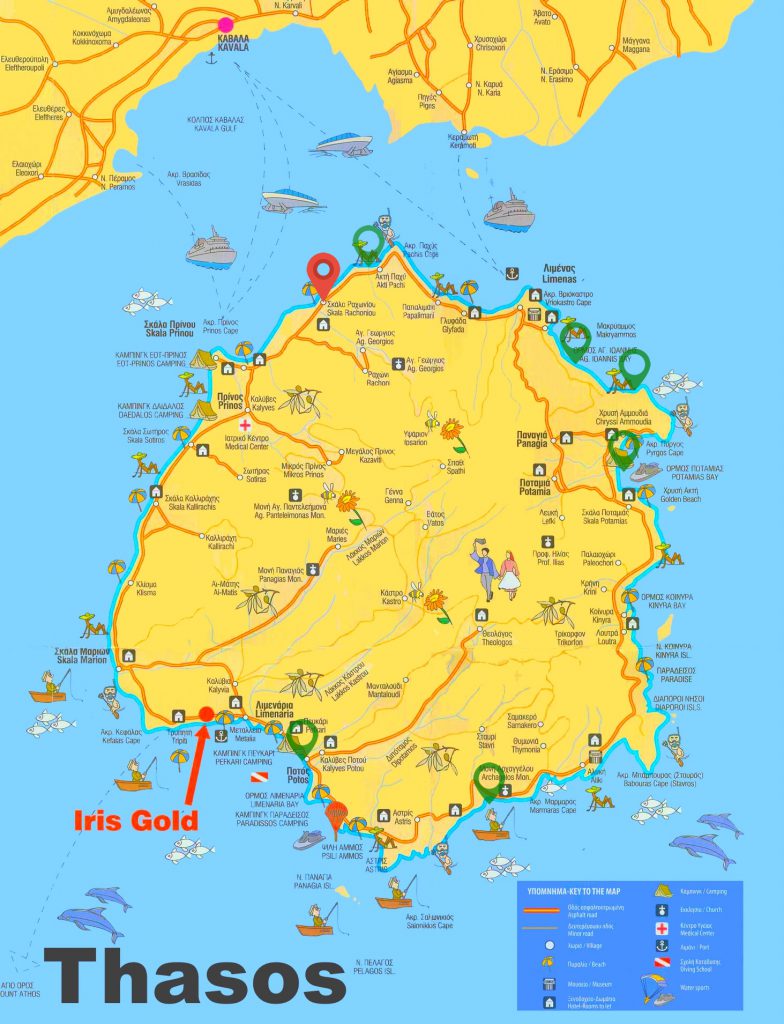 Map of Thassos island, copied from one of the leaflets distributed free of charge in the port.
Comentează pe Facebook
If you liked it, share it with your friends!

Passing through the Mud Volcanoes site