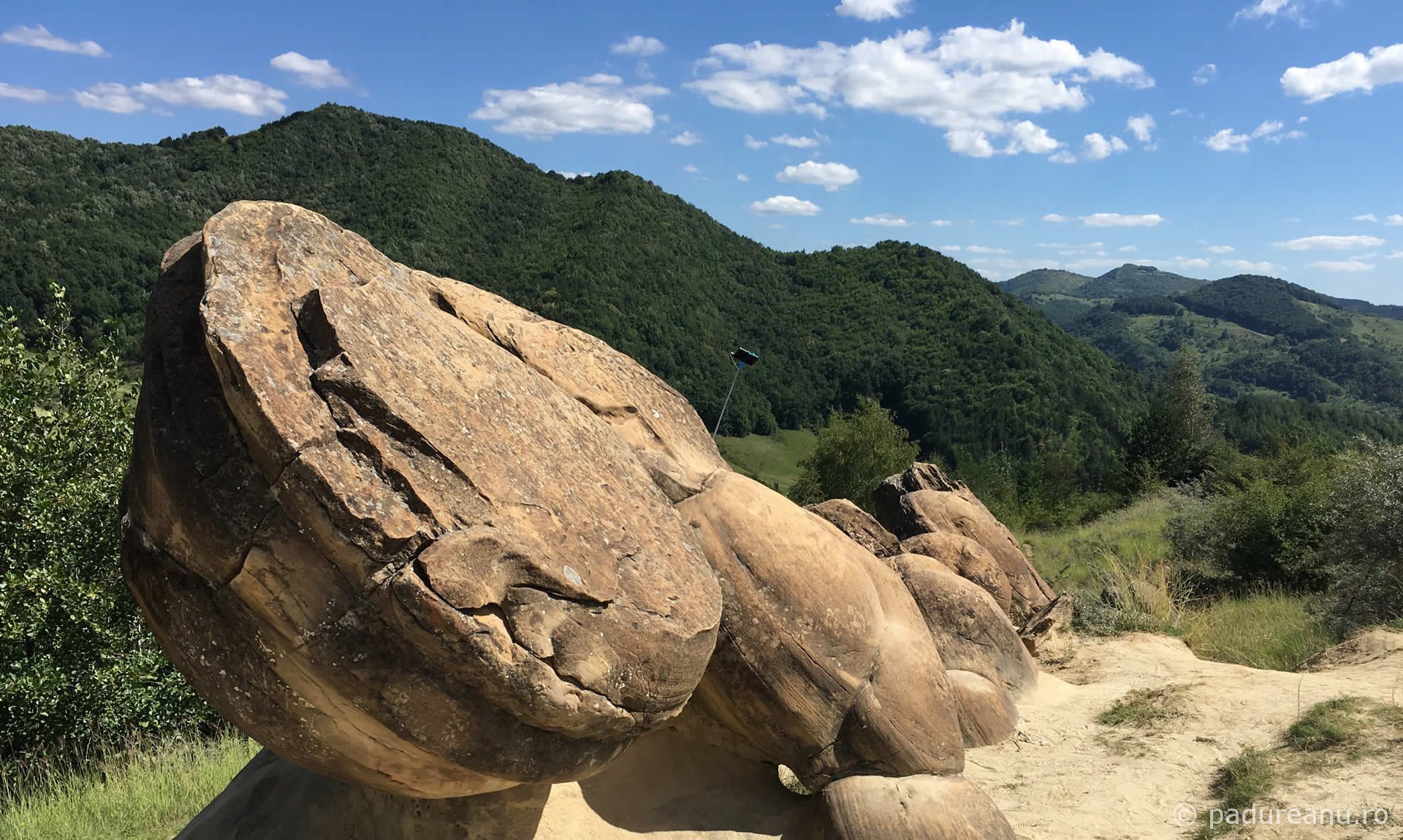 A visit to the "living stones" from Buzau mountains, strange stone formations with curious shapes

For those who do not yet know what a “concretion” or “living stone” is, here is the scientific description of the term:

The “living stones” are also called sandstone concretions, created in layers of sands, linked together by a carbonate cement, due to the limestone waters. Wikipedia

I confess that I had not heard of this term until recently, when my good friend Radu along with his wife Ada invited us to spend a weekend at their vacation house in Buzau area.

Therefore, last weekend, we paid Radu a little visit at his home, in an absolutely charming place, located in the valley of Buzau river, in the locality of Lunca Frumoasa.

Corina, my wife, along with Ada, had done their homework, and they kept talking about the “living stones” and the route up there. But Radu was much more expeditious, saying: “What “living stones”? You’re talking about Babele from Ulmet. We will get there in half an hour by car!”.

Therefore, we got in the car and set out on the road.

For those who want to follow in our tracks, from Bucharest, here is the route: Bucharest, Buzau on E85, then enter the beltway and at the bridge next to Ursus, get on National Road 10 that connects Buzau to Brasov.

Then, in the locality of Magura, turn right, on the county road 203L and pass through the localities: Lunca Frumoasa, Parjolesti, Trestia, Cozieni, Balanesti, Bercesti, Anini, Cocarceni and finally Ulmet.

The county road is very well paved on almost the entire length of the route. Only the last few kilometers are not yet rehabilitated, but this does not make the road less spectacular. The hills between which it winds through are covered with orchards or forested portions, the scenery, especially in the middle of summer, being an extremely invigorating one. With a good car I don’t think it can take more than two hours on the road from Bucharest to Ulmet.

The only thing that, unfortunately, the inhabitants are missing is water, most villages supplying themselves even now from the few wells dug on the side of the road. We also took some water from such a well and I couldn’t help but notice the rather brackish taste of the water.

Ulmet is a village with few houses, spread over the hills. From the main road an unpaved road branches off to the left, which with a car with a reasonable ground clearance you can climb up to near the objective. If you do not want to ruin your car, you can park it at the first crossroad and then, within half an hour at most, reach the objective on foot.

Climbing to Babele from Ulmet is done on a narrow country road that winds through the houses and then opens into a wide glade. The direction to the “living stones” is signaled as rudimentarily as possible, with some wooden boards that indicate “Babele”. The whole place seems stuck in time, as though time passes here according to different rules.

As we approached, after passing a huge tree, I saw on the left, the first “living stone” and we did not give in to the temptation to take a picture of ourselves near it. 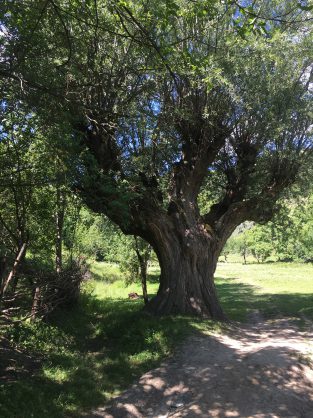 A historical tree right at the entrance to the meadow. 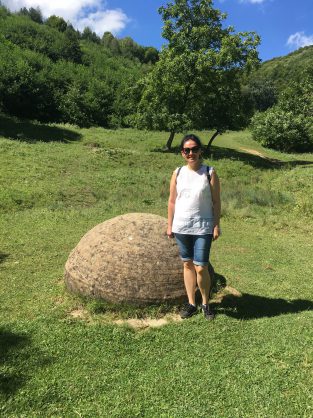 Corina, along with the first spherical living stone which emerges from the grass unexpectedly. 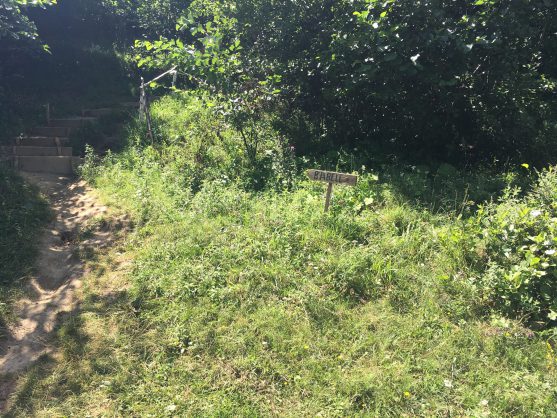 A wooden sign on the left of the meadow shows the road to Babele. 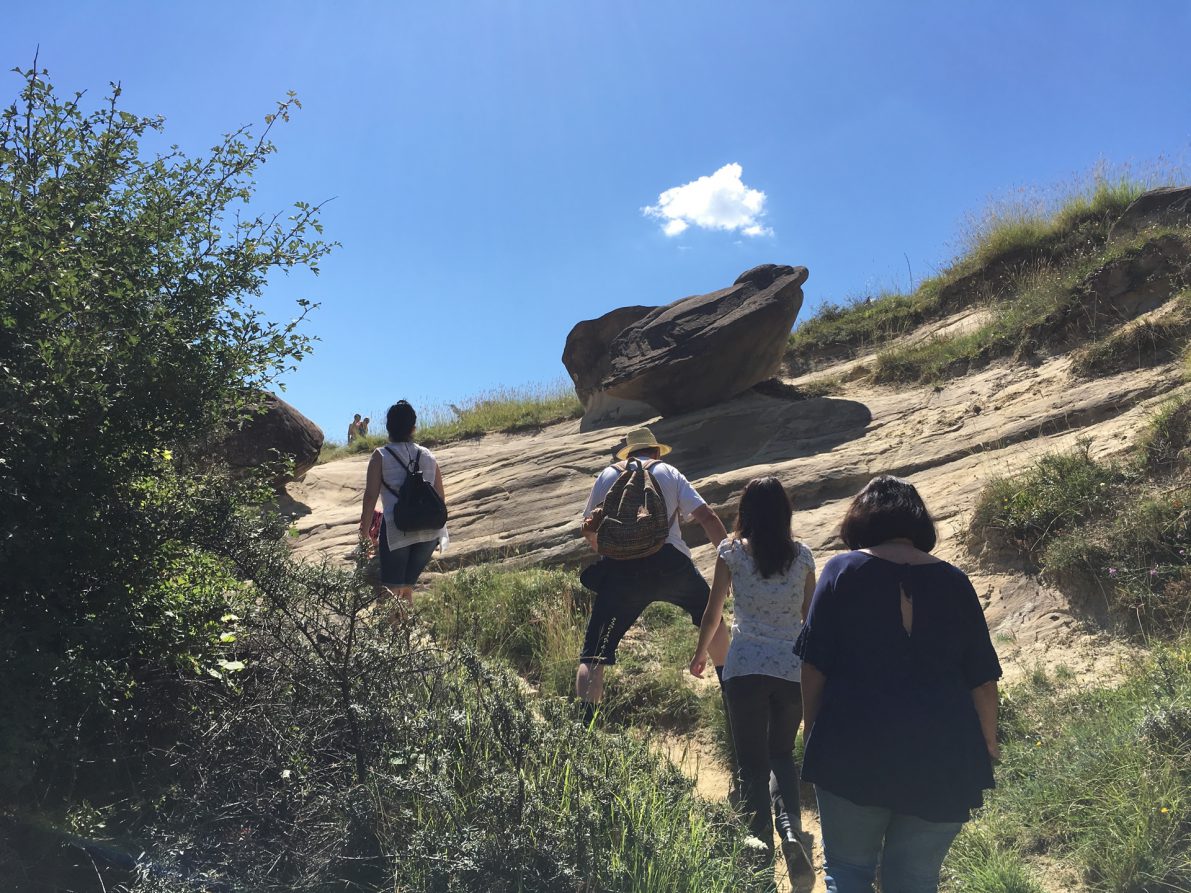 The trail climbs the slope of a hill nearly up to Babele.

The trail opens into a meadow, from where, on the left side, a path climbs through the forest to the plateau with “living stones”. The climb takes only 5-10 minutes, after which you reach a peak dominated by the main rock formations, called by the locals Babele. 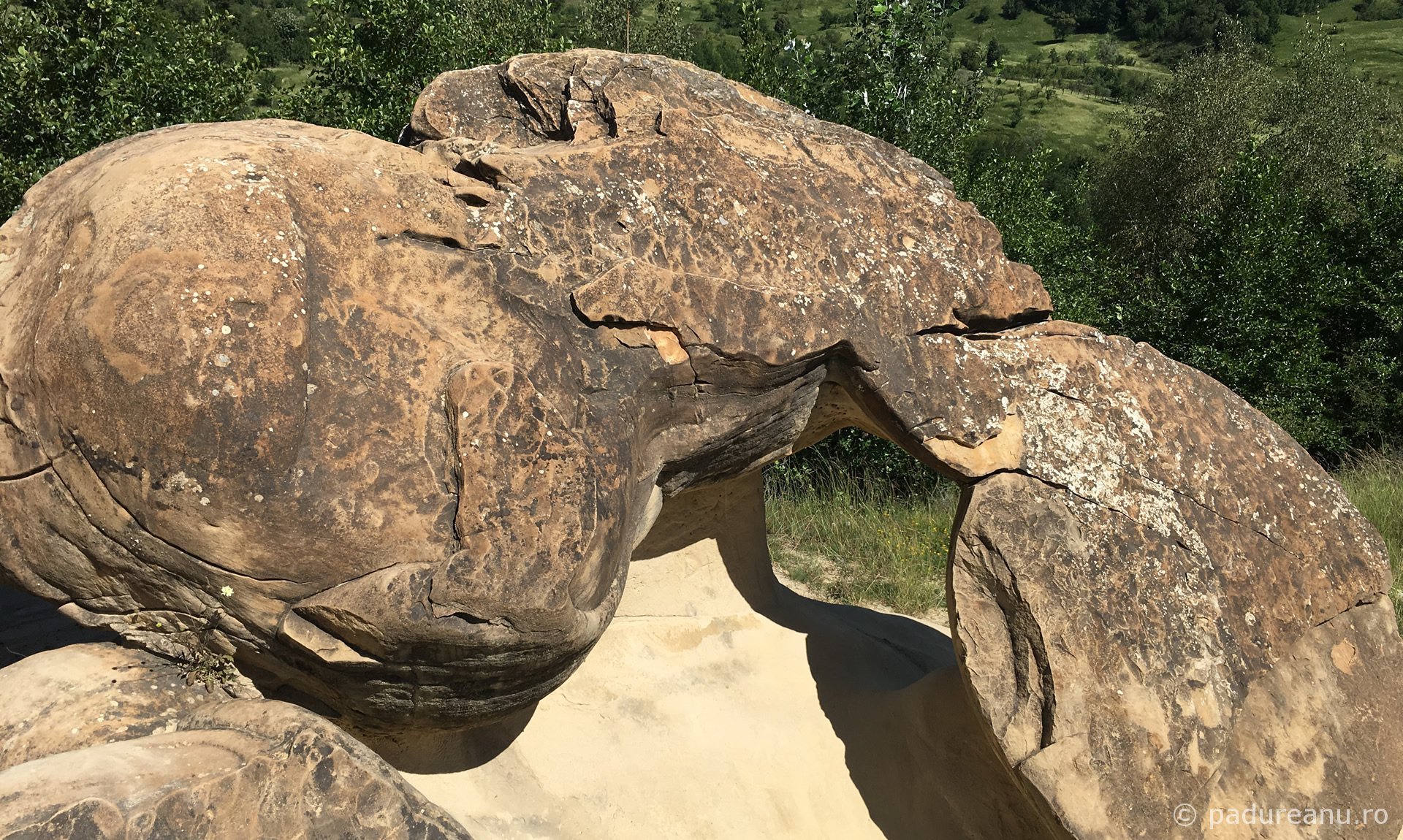 The look of the whole area is one reminding of Hollywood sci-fi movies. It looks like a spaceship that has been buried in the ground and is now about to fly, being oblique to the sky. 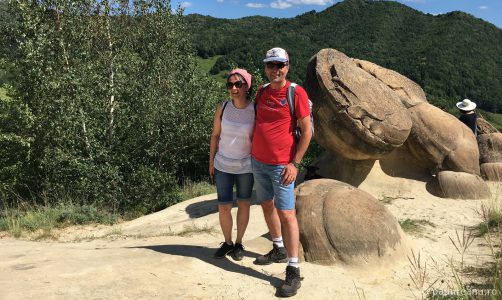 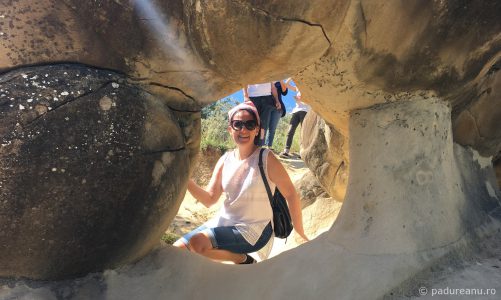 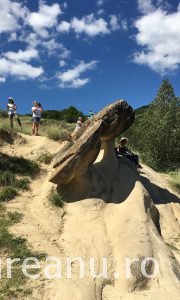 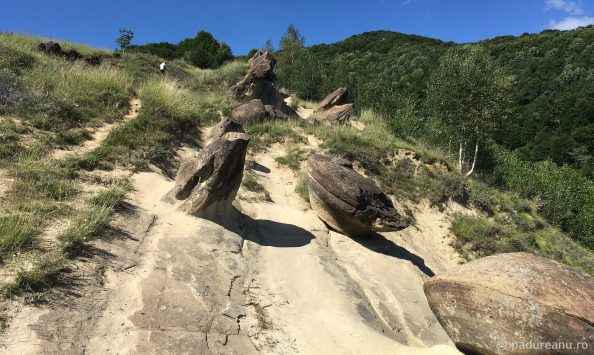 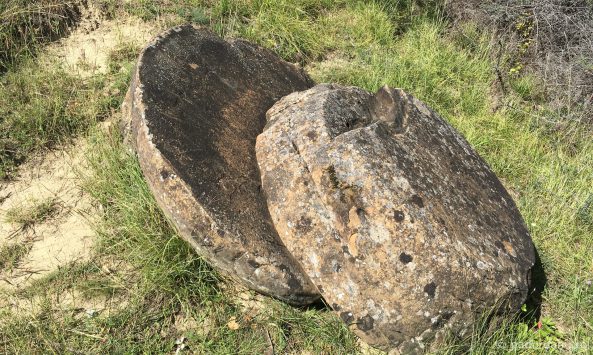 If you climb the path from the top, you immediately understand how the entire relief turned out. The edge of the hill is actually the edge of a collapsed valley, in geological ages, whose edges thus revealed the sandstone layers. They are inclined obliquely in relation to the current terrain, hence the striking image of tilted layers when you look at them from above.

As you climb, you discover new shapes of “living stones”, more and more curious, scattered everywhere: in the form of biscuits, shaped as hats, spherical or semicircular. 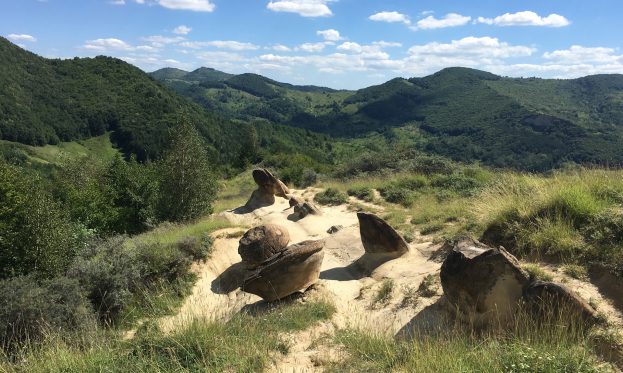 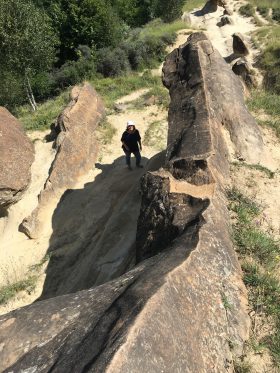 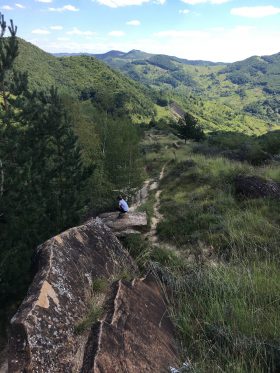 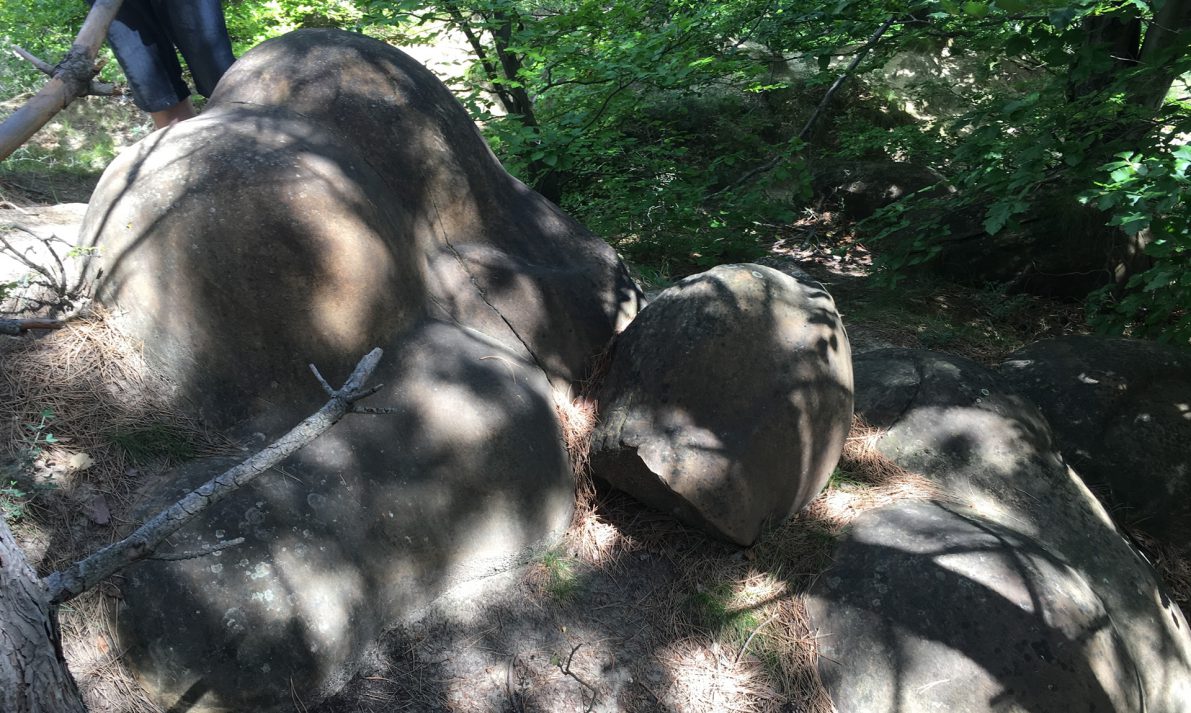 The route to Babele from Ulmet is an extremely easy one to tackle, and can be traveled by persons of any age. But do not forget to supply yourselves with water, because the local water sources, due to the clay soil, have a rather low quality.

It is a beautiful trip in nature which gives you the opportunity to discover a natural wonder, present only in a few places in the country.

For those who are wondering where similar formations can be found in the country, here is their list:

Passing through the Mud Volcanoes site