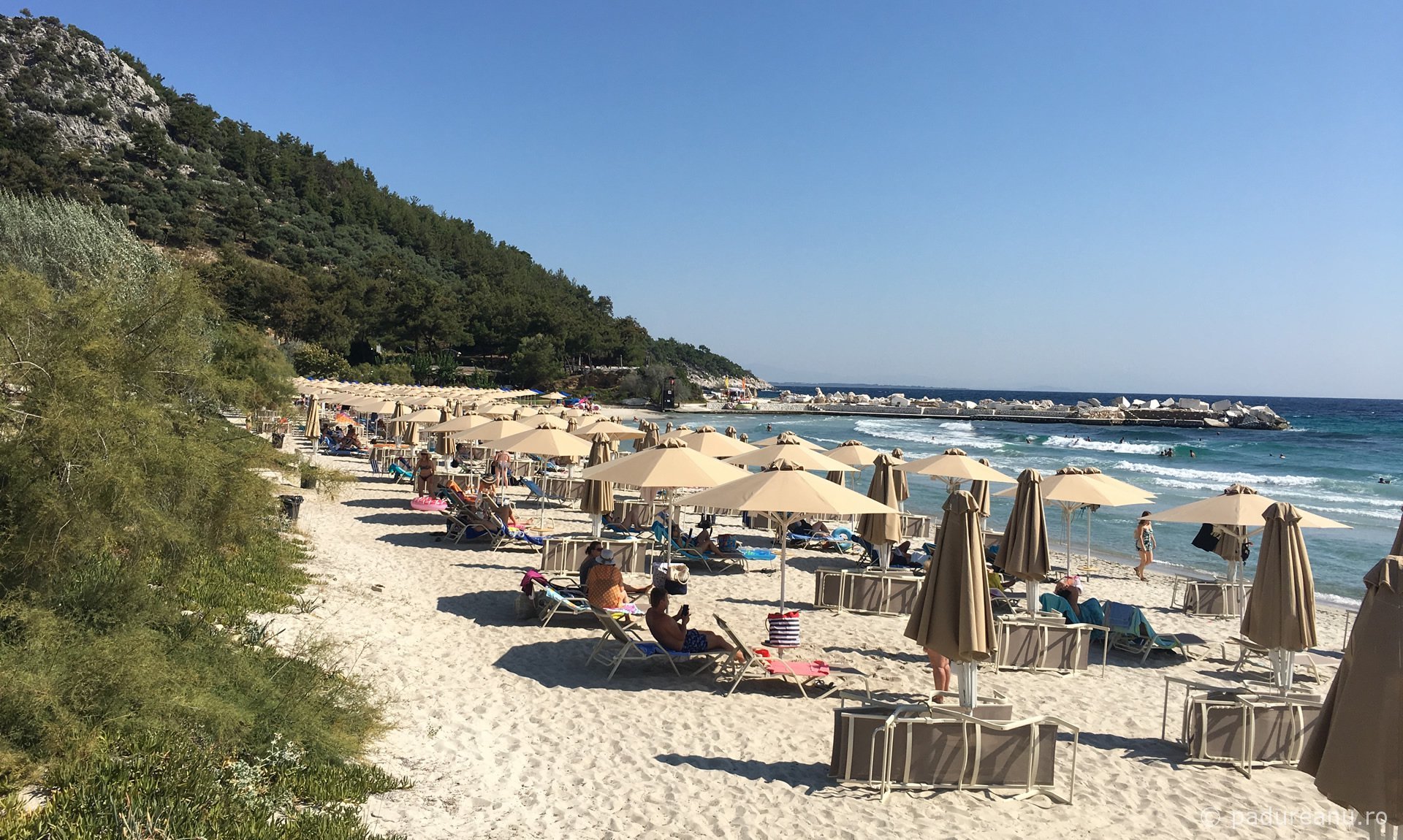 Macryammos Beach is located in the immediate vicinity of the city of Thassos (Limenas), practically in the next bay and it is a private beach. It belongs, together with a property of approximately 36 hectares of forest, to the bungalow complex with the same name.

Here is the relative position of the beach on the map of Thassos Island: 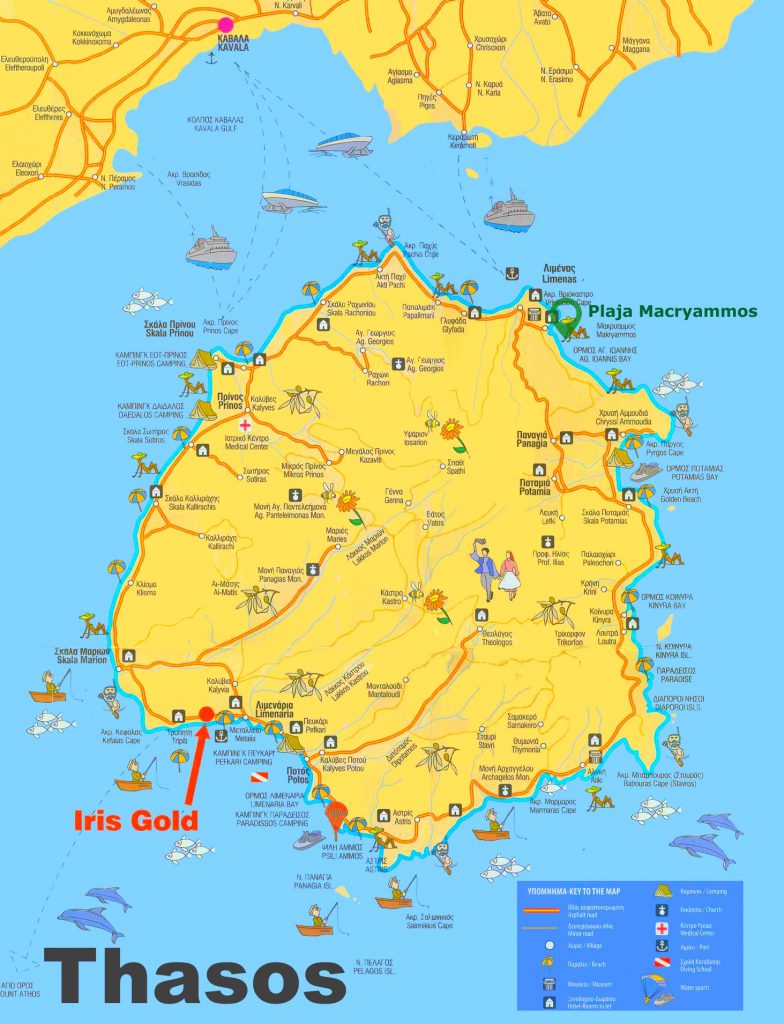 Access to the Macryammos complex is possible from the road that runs around the island, through a well signposted intersection, which leads to both the complex and to the heavily publicized Marble Beach. It is a road that leads to a district of the city of Thassos (Limenas), but turning right on this road, you reach the gates of the complex in 2-3 minutes.

Macryammos beach is a beach belonging to a hotel complex. It is intended, along with all other amenities, first and foremost for its customers. However, the access of any visitor is allowed on the beach in exchange for a fee to be paid at the entrance. It costs 10 Euro for an umbrella and 4 Euro for a lounge chair, practically the amount of 18 Euro being the minimum to enter the complex. For any other additional lounge chair, the amount of 3.5 Euro must be paid at the reception.

Although we were a little displeased at the beginning because of these amounts and because of the procedure in general, we realized later, that the value was more than justified in relation to the quality of the services and facilities that were made available to us. We therefore paid the tax requested, the gatekeeper issued us a tax receipt (one of the few seen in Thassos) and kindly gave us some instructions.

Access is made by car, following a road which winds through the bungalows hidden among the trees. The entire slope is populated with several dozen such slate-covered “cottages”, built in great taste.

The route goes down to a parking lot, from where you have to go to the reception of the complex, where, based on the receipt received at the gate, you are handed the “key” of the umbrella that was assigned to you.

At first I didn’t quite understand how the system worked, but after asking a hotel employee, “we got the idea” and searched on the beach for the umbrella with the same number as the one written on the key received.

Everything was perfect, you practically reach the place, use the key to “open” the umbrella and release the two lounge chairs, which are connected with a kind of chain. The equipment is of the highest quality, and the distance between the umbrellas are very large, so that you have enough privacy.

As we were 3 persons, we were immediately brought a third lounge chair and asked if we wanted to be served with anything. Sure, consumption was not mandatory, but people were friendly and I appreciated that.

Here are some pictures of the location: 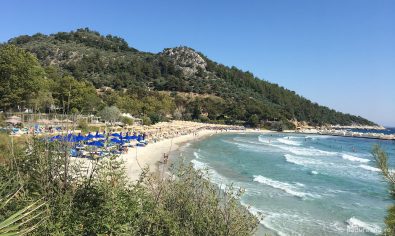 Macryammos beach, seen from the right side of the bay 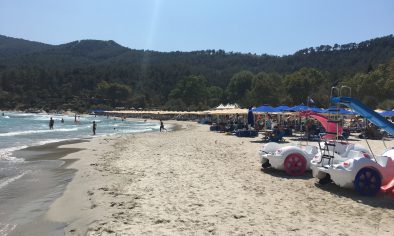 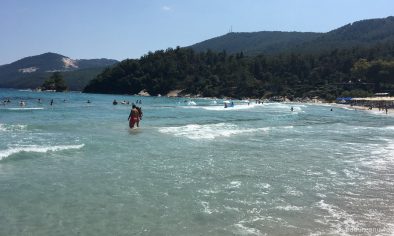 The water is clear and shallow far offshore 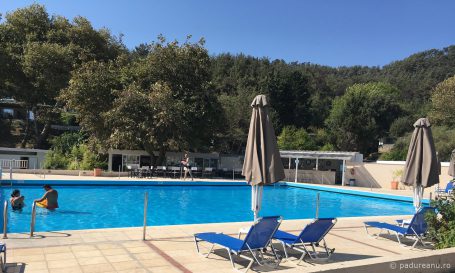 The pool is available for visitors at no extra charge 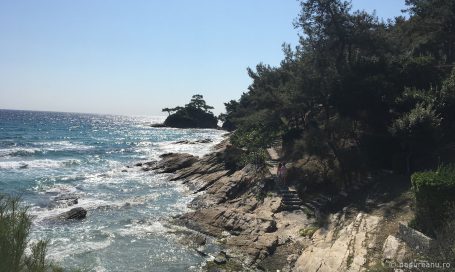 The right side, where on a path you can climb up into the forest that surrounds the bay 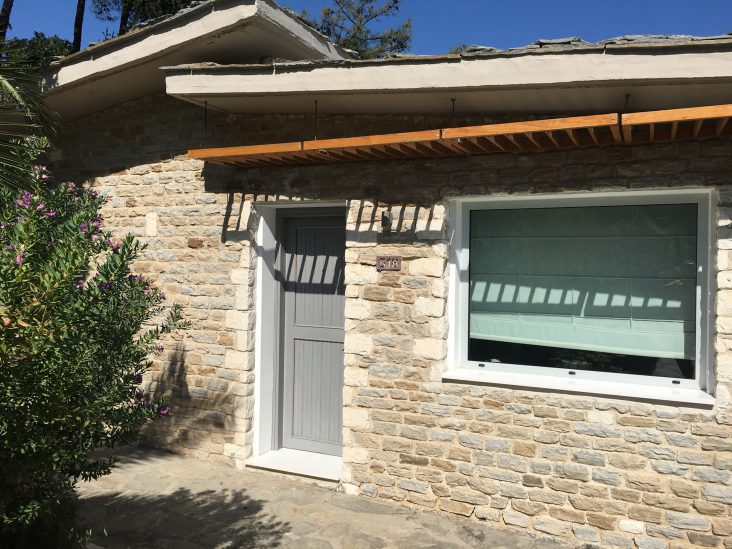 A bungalow overlooking the sea, where I would like to come for a future vacation 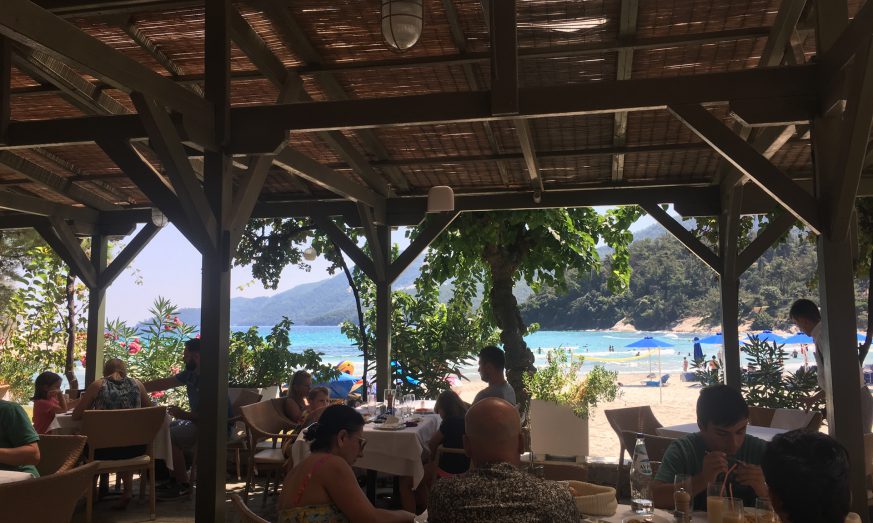 Tavern terrace on the left side of the bay 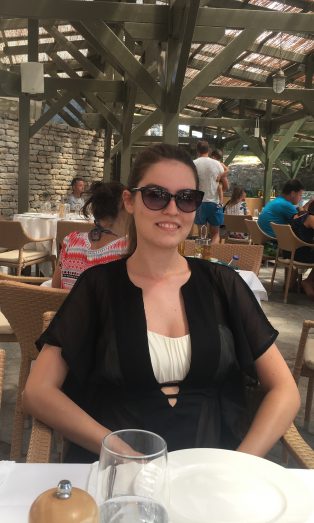 Daria of course, waiting for food to come soon 🙂

We liked Macryammos beach first of all because of the elegant and civilized way in which it was managed. Nothing seems to be left to chance, although you do not feel that restrictive rules are applied in any way.

It’s not a beach for noisy customers, but for people who want to feel good at the beach, read a book, or just admire the sea and the surroundings.

At the right end of the beach, there is also a swimming pool, which is open for visitors, while at the left end there is a “tavern” where you can have lunch.

The sand is extremely fine, there are no stones at all, and the sea is so translucent that with snorkeling equipment you can see hundreds of fish of different shapes in the water.

Now, regarding the possibilities of dining, at the left end of the beach there is a “tavern”, in fact a clean, covered terrace, belonging to the same complex, probably included in the same management. However, the staff refers to this place as if it weren’t a part of the complex, which surprised us a little. Although the complex had a restaurant, which also included a terrace, it was empty and unused.

At the tavern one can eat quite well, but the prices are significantly higher than those encountered in the establishments that we found in more populated areas.

Macryammos beach was a very pleasant surprise, allowing us to live another type of experience on the Thassos island, the experience of closed circuit beaches.